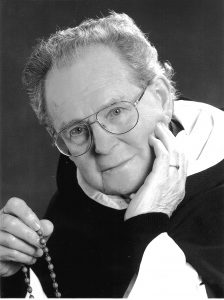 Fr Gabriel Harty, a friar of the Order of Preachers, was born in Dublin on 31 July 1921, the second of three children born to John Joseph Harty and Margaret Gleeson. He was baptised in St Andrew’s Church, Westland Row, Dublin, on 4 August, the feast day of St Dominic, and named Thomas. His father, a clerk in the Munster and Leinster Bank, and later a furniture salesman for Pim Brothers & Co., South Great George’s Street, Dublin, acquired a furniture shop at 8 Lower Ormond Quay, Dublin, after a win in the Irish Hospitals’ Sweepstake. His mother died from tuberculosis when Fr Gabriel was two years of age and his father subsequently married Delia Kissane, a primary school teacher and an Irish language enthusiast.

As a child, Fr Gabriel attended the national schools at Straffan and Leixlip of which his stepmother was principal before continuing his primary education at Scoil Colmcille, Marlborough Street, Dublin, where all the teachers were Gaelgóirí and all instruction was through the medium of Irish. As to his secondary education, after a single day at O’Connell’s CBS, North Richmond Street, Dublin, where he struggled with subjects taught as Béarla, he transferred to Coláiste Mhuire, Parnell Square, Dublin.

The bells of the ‘Angelus’

The influence of his confessor, Fr Pius Cleary, O.P., Prior, St Saviour’s Priory, Dublin, and ‘the silent splendour’ of Br Pius McArdle, O.P., prompted a visit to St Mary’s Priory, Tallaght, in 1938, a visit that came to an unfortunate end when Fr Gabriel proved unable to recite the Angelus, in English, with Fr Dominic ‘Matt’ Fahy, O.P., the Master of Students.

A priest in the Archdiocese of Dublin

That same year, Fr Gabriel entered Holy Cross College, the seminary for the Archdiocese of Dublin, where a series of bursaries eased the financial burden education for the priesthood placed on his family. For three years, he attended University College Dublin in Earlsfort Terrace for a degree in philosophy. He then studied theology in the seminary for four years, admitting some years later that he found ‘the way theology was done … exceedingly dull.’ On the other hand, his years in the seminary afforded him a first contact with the Servant of God Frank Duff, founder of the Legion of Mary. On 26 May 1945, Fr Gabriel was ordained to the priesthood in the seminary chapel by Archbishop John Charles McQuaid, C.S.Sp.In the months immediately after his ordination to the priesthood, Fr Gabriel assisted as a chaplain to Mountjoy Prison. His first official assignment was as chaplain to the Dominican Convent, Eccles Street, Dublin, a role he managed to combine with the duties of spiritual director of the presidium of the Legion of Mary at the Morning Star Hostel. After a year, he was appointed chaplain to St Gerard’s Boys’ School, Bray, regarded as one of the plums of the diocese. In these first years of priesthood, his perusal of The Inner Life of the Very Reverend Père Lacordaire, O.P. by Fr Bernard Chocarne, O.P., made a profound impression on Fr Gabriel, revived his interest in the Dominican Order, and prompted him to approach the archbishop regarding a vocation to religious life. In response, the archbishop appointed him to the Parish of the Most Precious Blood, Cabra, in 1948 to gain a deeper experience of parochial ministry, advising, ‘My son, make not haste in a time of cloud.’

A year later, Fr Gabriel, ‘a lapsed secular,’ received the habit at St Mary’s Priory, Cork, on 14 September 1949. As a priest, he was allowed to choose his own name in religion and he chose the name Gabriel. After his first profession on 15 September 1950, he was assigned to St Mary’s Priory, Tallaght, where he studied philosophy for one year and theology for another. In the course of a canonical visitation conducted by Fr Emmanuel Suarez, O.P., the Master General, Fr Gabriel disclosed a great interest in our Lady and the Rosary. So, to prepare him for the work of promoting the Rosary he was assigned to Collegio San Clemente, Rome, in 1952 in order to attend the Institute of Spirituality at the Pontifical International Athenæum of the Dominican Order, the Angelicum, where he obtained a diploma to which he never again referred! In addition to his lectures at the Institute of Spirituality, Fr Gabriel diligently sought out theological treatises on the Rosary and its representation in art until his year in Rome came to an end with an instruction from the Master General to go to Lourdes to prepare for the work of preaching the Rosary. After his arrival in Lourdes, a railway strike paralysed the whole transport system in France and so Fr Gabriel spent six weeks in Lourdes, arriving back in Tallaght just in time to pronounce his solemn profession on 15 September 1953.

Almost immediately Fr Gabriel was appointed assistant to Fr Gabriel Keenan, O.P., Director of the Rosary Crusade. Diverse in temperament, it soon became apparent that they operated after the manner of two goats, pulling in opposite directions. Fr Gabriel, the elder, considered the Confraternity of the Most Holy Rosary the basis for the apostolate of the Rosary. Fr Gabriel, the younger, found its literature uninspiring and uninviting. Again, Fr Gabriel, the elder, found it difficult to engage with the idea of a newsletter. Fr Gabriel, the younger, embraced the idea with enthusiasm and the first issue of The Rosary Letter appeared on 25 March 1954. At its height, The Rosary Letter enjoyed a circulation of 100,000 and was despatched on a vast international basis. It was also Fr Gabriel, the younger, who adopted the golden rose as the emblem of the Confraternity of the Most Holy Rosary, inspired by the statue of Our Lady of Knock. The gift of a Bedford van in 1954 prompted him to learn to drive … in a single afternoon … and enabled him to immerse himself in the emerging Industrial Rosary Crusade, a movement that fostered the daily recitation of the Rosary in hundreds of industrial and commercial centres such as the Guinness Brewery, Dublin, Jacob’s Biscuits, Dundalk, and Shannon Airport. With the Legion of Mary as his greatest ally, his imagination, commitment, and sense of adventure caused the Industrial Rosary Crusade to flourish. Indeed, it flourished to such a degree that in 1958 an office was established at 48 Parnell Square for its effective organisation and Fr Gabriel was assigned to St Saviour’s Priory, Dublin.

A difficult storm to weather

In 1966, Fr Gabriel was appointed superior of St Saviour’s Priory, Waterford. A year and a half later, he was elected prior of St Mary’s Priory, Cork, an office to which he felt utterly unsuited and from which he resigned in 1969, upon the advice of the Servant of God Frank Duff and the Most Rev. Finbar Ryan, O.P., Archbishop Emeritus of Port of Spain, Trinidad. Later that same year, the brethren at the provincial chapter entrusted to him once again the Apostolate of the Rosary and an office was established at St Mary’s Priory, Tallaght. The following year, the archbishops and bishops of Ireland appointed him the National Spiritual Director of the Blue Army of Our Lady of Fatima. However, in the wake of Vatican Council II the Apostolate of the Rosary had a difficult storm to weather and in 1976 a disheartened Fr Gabriel repaired to Rome where years earlier he had discovered the riches of the Rosary. After a year at Collegio San Clemente, he was assigned to Corpo Santo, Lisbon, and then to the Black Abbey, Kilkenny, where he remained until assigned to Sligo in 1983. During his time at the Black Abbey, contact with the mystical writings of a member of the Dominican Laity animated Fr Gabriel with a new enthusiasm, leading to the publication of 100,000 copies of The Healing Light of the Rosary and a flourishing healing ministry associated with the Rosary.

The Rosary in hearts, hands, and homes

Unsurprisingly, Fr Gabriel was again appointed Promoter of the Apostolate of the Rosary in 1984 and assigned to St Mary’s Priory, Tallaght, an assignation he retained for the next ten years except for one year in St Magdalen’s Priory, Drogheda. By the end of 1994, ill health had obliged him to request assistance in the management of the apostolate. Assigned to St Catherine’s Priory, Newry, earlier that same year, his interest in the promotion of the Rosary remained undiminished and in 1996, having celebrated the Golden Jubilee of his ordination to the priesthood the previous year, he was once again appointed promoter. Assigned to St Mary’s Priory, Tallaght, in 2000, his official association with the Apostolate of the Rosary came to an end two years later leaving him with a terrible sense of loss.

However, no longer burdened with the management of the Apostolate of the Rosary, he devoted all his physical and spiritual resources to putting the Rosary into hearts, hands, and homes, adding to the many books and pamphlets he had already published. Always adroit in the use of technology, he also launched a blog on the Rosary and although his external ministry had diminished with age, he insisted that ‘there is … inner fire, still burning within me.’

The truth of his words was soon to be realised. In 2013, assigned to St Malachy’s Priory, Dundalk, Fr Gabriel was appointed chaplain to St Malachy’s Girls’ School. Firmly convinced that education had to enlarge the heart as well as fill the mind, he proved to be ‘a wonderful inspiration’ to staff, pupils, and parents. Indeed, admiration for Fr Gabriel prompted one pupil to address a letter of praise in his honour to His Holiness, Pope Francis, and she was favoured with a reply from the Apostolic Palace.

A fresh and fragrant loveliness

Naturally, his years began to make themselves felt and ill health began to intrude upon his life with an insistence he could no longer ignore. A man for whom the world of the unseen was no less real that the world of the seen, Fr Gabriel died in Our Lady of Lourdes Hospital, Drogheda, on 9 May 2019. After reposing in St Malachy’s Priory, his remains were removed to the church on 12 May 2019. On 13 May 2019, the memorial of Our Lady of Fatima, Fr Gregory Carroll, O.P., Prior Provincial, was the celebrant of the Mass of Christian Burial at which the choir of St Malachy’s Girls’ School sang as requested by Fr Gabriel. His remains were interred in St Patrick’s Cemetery, Dundalk.

Throughout the years of his priesthood and religious life, he constantly and faithfully laboured to ensure that ‘the wild rose of the Rosary would bloom with a fresh and fragrant loveliness.’ Ní bheidh a leithéad arís ann.